The Rise and Fall of Wirecard

By now we are certain you’ve seen the many headlines about the Wirecard scandal. Over the years Wirecard had been the rising star of Germany. It had replaced Commerzbank on the Frankfurt stock exchange and, at its peak, Wirecard was valued at over EUR 24 billion. So where did it all go wrong?

When one charts the key milestones in the years leading up to the 2020 accounting scandal, an overall a pattern emerges. One where important early warning signs were overlooked, any allegations against the company were fiercely litigated, and market analysts and investors followed the consensus.

Wirecard was founded near Munich in 1999 as a payment processor for credit card payments. The first years included a bankruptcy and a merger. The company has been listed on the Frankfurt stock exchange since 2005 when they took over a listing of a defunct company and thereby circumvented an IPO.

With the acquisition of XCOM in 2006, the company acquired licensing and issuing capabilities from the card schemes and renamed itself Wirecard Bank. Due to this hybrid form of operations – also handling money on behalf of merchants – their financial statements became harder to compare with their industry peers. This paved the way for them to convince investors to follow their adjusted statements.

As early as June 2008 Wirecard was first accused by the German shareholder association SDK of having falsified its accounting in 2007. The accusations instigated a legal battle that resulted in Wirecard being cleared by an audit by EY and the director of SDK resigning and facing prison time for share price manipulation.

From 2011 onwards Wirecard raises a total of EUR 500 million and takes on a variety of obscure acquisitions across the globe, including its regional, and now notable, headquarters in Singapore. Since 2015 the Financial Times (FT) started raising further questions about Wirecard’s financial statements, with a suspected EUR 250 million gap on its balance and potential fraud, that was featured in the newspaper's the ‘House of Wirecard’ series. This resulted in another legal battle and further attention from other financial journalists.

From then on various parties have raised additional questions. In November 2015, J Capital Research (JCap) reported that it found very little evidence of any business volume in Wirecard’s Asian operations, which largely amounted to a string of acquired companies. JCap went looking for offices and employees of the legal entities in Asia, but found that premises appeared much smaller than the business would suggest, or they could find no location at all.

Over the coming years further allegations were raised by research analysts and short sellers that questioned the size of the business and raised suspicions about money laundering. All the claims were countered by Wirecard as ‘untrue and slanderous allegations’ that arose from a fundamental misunderstanding of their business model. Or they explained it away as actions taken by their detractors who just wanted to benefit from short selling. 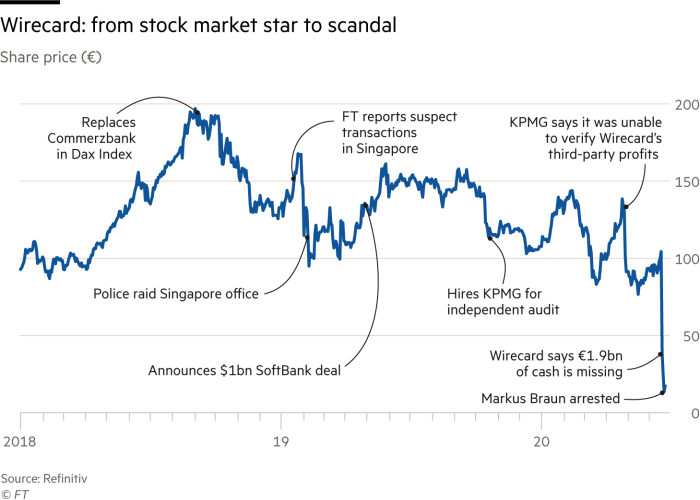 THE BEGINNING OF THE END

In March 2018 the internal legal team of Wirecard’s Singapore office began the first investigations into three members of the finance team. The investigations came about after an internal whistleblower highlighted plans for fraudulent ‘round tripping’ – a practice used to inflate reported revenues – via third parties. The Wirecard Head Office in Munich is said to have been aware of these practices.

Supported by information from the whistleblower, the FT first reports on the Singapore investigation in January 2019. Following this news coverage, the Singapore police opens an inquiry and raids the local Wirecard office in February 2019. One month later the FT reports that half of Wirecard’s business is outsourced to third-parties who pay a commission, however, it could not find any evidence of the existence of these partners.

Further details released by FT in April 2019 highlighted that only three partner companies – located in the Philippines, Singapore and Dubai – accounted for most of Wirecard’s profit. In response Wirecard accused FT of collaborating with short sellers. Further doubts were raised in October 2019 when FT claimed that the Dubai and Dublin business units inflated their revenues and that their customers did not exist.

Under pressure from investors, Wirecard chose to fight these accusations and, in addition, appointed KPMG for an independent audit that was originally due March 2020. More questions were raised in December 2019 regarding the cash in escrow accounts included in Wirecard’s own cash balances. The March publication deadline for the audit report was delayed given that KPMG could not verify the majority of the Wirecard’s profits report for 2016-2018, and they found many obstacles carrying out their work.

On same day that the KPMG audit report is published, April 28, 2020, Wirecard’s CEO Markus Braun stated that EY earlier informed him that they have no problem signing off on the 2019 audits. Nevertheless, the publication of the 2019 financial statements is postponed until June, and this was attributed to COVID-19.

In reality trouble was on the horizon, and shortly thereafter EY received documents from a trustee in the Philippines that demonstrated EUR 1.9 billion was supposedly held in accounts with local banks BPI and BDO. Questions surrounding the existence of these funds are what brought Wirecard’s fraud to international attention.

A month later, an investigation launched by the German regulator BaFin into misleading financial information accelerates Wirecard’s downfall. On June 5, German prosecutors launched a criminal investigation against the CEO and three other Wirecard Board Members. At the time, the Board remained seemingly optimist that the accusations would soon be resolved.

June 16 trouble mounts when Filipino banks BPI and BDO, who were supposed to hold EUR 1.9 billion of Wirecard’s funds, inform EY that they did not have those funds nor did have a relationship in any capacity with Wirecard. EY’s initial statement is that the funds are missing and, as a result, the publication of the 2019 results are again delayed.

Wirecard responds by claiming it’s too early to say if there has been fraud, but sought to file an investigation against ‘undefined persons’. The COO Jan Marsalek is suspended, and then a few days later CEO Markus Braun resigns. If this were not enough, Wirecard is also facing the challenge of having to refinance a EUR 1.75 billion loan funded by a consortium of 15 international banks. However, in order to refinance and prevent restructuring, Wirecard needs to have its 2019 financial statements approved.

On June 22 Wirecard acknowledged that the EUR 1.9 billion did not exist and that fraud had potentially taken place. The following day CEO Markus Braun is arrested on suspicion of accounting fraud and market manipulation while former COO Jan Marsalek is purported to have escaped to the Philippines and then to China. On June 25 EY stated there were clear indications of elaborate fraud relating to the missing billions, which involved multiple parties over many years. In response Wirecard AG files for insolvency over ‘impending insolvency and over-indebtedness’, while evaluating whether it will also to file insolvency proceedings for its subsidiaries.

One day later, despite being excluded from the insolvency, the UK subsidiary Wirecard Card Solutions (WCS) is suspended by the UK Financial Conduct Authority (FCA). All of a sudden a great many fintechs were left without any card payment capabilities for their customers (e.g., Crypto.com, Curve, ANNA Money, Holvi, P.F.C., and others). This suspension was lifted on Tuesday June 30, which meant WCS card activities could resume once again.

To date, the subsidiaries (i.e., Wirecard Bank AG and Wirecard Card Solutions) are not part of the insolvency proceedings of the Wirecard Group (Wirecard AG). This means that the payment services regarding card issuing and acquiring can continue as usual, and without interruptions to both operational and payment processes. Only the third-party acquirer (TPA) business, which helps retailers accept credit card payments, is still under review.

While this may bring measured relief for some, it by no means provides mid- to long-term assurances. The business operations of the Group can proceed, but it is being continuously reviewed as to whether the insolvency applications also have to be filed for subsidiaries. And, remember, many details are still coming to light. EY only recently identified the fraud, and is said to be negligent for failing to ask for original bank statements.

The German regulator BaFin is also facing heat as it later admitted that it was not directly supervising the company, having outsourced it to the firm DPR despite repeated discussions to the contrary. Furthermore, BaFin is alleged to have even struck back against those who raised early suspicions about Wirecard and put a ban on short selling.

It is undeniable that this sweetheart of German fintechs has now had its wings clipped. Going forward there are multiple scenarios: specific business units may be acquired by others, the company may be restructured and/or card schemes and other stakeholders may withdraw their licenses. What is clear, however, is that the future remains uncertain.