In recent years, we have witnessed the steady rise of digital challenger banks, also referred to as neo banks. They have been touted for their innovative propositions and efficient digital operating models.

It seemed that the only way was up. However, with the COVID-19 pandemic, neo banks have experienced significant drops in customer sign-ups, their share of active users and transaction volumes. Their access to funding is also drying up because of lower valuations.

Neo banks represent a rather heterogeneous group of companies, in terms of their core-propositions, operating models, stages of development, cash-reserves and geographic markets. Therefore, they are not impacted equally.

Overall market growth has been halted, but large differences exist between neo banks

Neo banks’ impressive market growth has abruptly halted. While our Index grew over 30% per year since 2017, its growth has been flat (+0.1%) since January and decreased 4% since its peak in February.

Various factors explain the abrupt end to neo banks’ market growth. Consumer spending decreased substantially due to the global lockdown – as neo banks are often used as secondary accounts for specific uses, they were impacted particularly hard. Moreover, while neo banks’ are well equipped for a lockdown (being digital native and working remotely), they suffer from users’ ‘flight to the safety’ of traditional banks.

Robinhood, the US pioneer in commission-free trading, has come out as the primary winner. On the back of the strong demand for SME lending, the UK’s Starling Bank also experienced strong growth. Brazil’s Nubank continued its impressive growth to take the top position in our Index, with over 25 million customers across Latin America. In Europe, however, leading players such as Revolut, N26 and Monzo are facing declines. 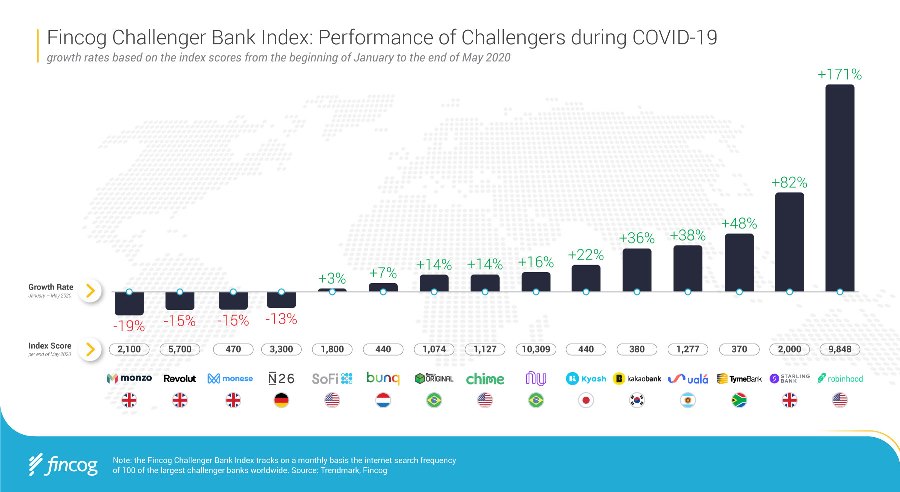 Neo banks in daily banking generally have experienced rather low and often even negative growth. Why? The overall decline in spending and the decrease in credit card use impacted the daily banking category’s growth. These accounts are also often used as secondary accounts for low-volume, high-frequency expenses such as paying for a drink at the bar or grocery shopping. In these times of crisis, trust is an important factor, and these accounts are also prone to ‘flight to safety’ as consumers trust incumbent brands more.

This is all reflected in these neo banks’ reduced share of active customers. P.F.C. from Sweden is one of the few exceptions. It has sustained transaction volumes in March and April (the peak of the crisis) and saw continued, stable growth of new customers.

The headwinds caused by the pandemic are reflected in the loss of traction of leading neo banks centred around daily banking. Monzo’s Challenger Bank Index score fell by 19%, while Revolut and N26’s fell by 15% and 13%, respectively. Monzo has reportedly been hit by a 40% lower valuation for its latest fundraising.

There are large differences between regions. European neo banks – particularly the leading UK challengers – were typically negatively impacted, while neo banks in North America, South America and Asia generally maintained high growth. The Brazilian Nubank continued to expand across Latin America and has now reached over 25 million customers – this is reflected in a 16% growth in our Index since beginning of the year, and Nubank now takes the top position. Nubank’s Argentinian peer Uala grew its Index score by 38% during the same period. In Asia, the Japanese neo bank Kyash managed to raise €45 million in funding.

Trading: the winners of the crisis

Trading includes neo banks centred around trading stocks and cryptocurrencies, such as Robinhood, Stash and Acorns. Trading has been the real winner of the crisis, not only regionally but globally.

The surge was driven by the market’s high volatility and first-time buyers entering the market that wanted to benefit from seemingly low-price levels. Moreover, the US stimulus plan includes a USD 1,200.00 cheque per adult and a USD 500.00 cheque for children, which has reportedly often been used to invest in the stock market.

The US-based Robinhood has come out as the main winner. It may have initially attracted too many customers as three rather untimely outages plagued its trading system during the high market volatility in March. However, it seems to have overcome these problems and continues to attract ever more customers. Robinhood is one of the primary winners of our Challenger Bank Index, with a growth of 171% since the beginning of 2020.

Other US trading companies also fared well during the crisis. Acorns, for example, saw record-high new customer sign-up figures of 9,800 per day, up 45% from their normal growth. Moreover, digital investing and banking platform Stash secured USD 112 million in funding amidst the stock market turbulence and grew its Challenger Bank Index score by 82% since the start of 2020.

Foreign currency: the market is impacted, but some players prove resilient

The foreign currency group of neo banks includes neo banks that centre around international money transfers and international payments such as travel cards. Measures taken to prevent COVID-19’s spread (countries going into lockdown and borders being closed or strict quarantine measures implemented) have severely impacted foreign currency exchange. For the travel that continued, spending overseas dropped as consumers’ tightened their budgets and did not have as many options to spend their money on during lockdown.

At the same time, migrant workers globally faced a sudden loss of income as they lost their jobs, and often moved home. In April, the World Bank predicted that remittances to low- and middle-income countries would see the sharpest drop in history, with a 19.7% decline from USD 554 billion in 2019 to USD 445 billion in 2020.

Remittance agents and other foreign currency companies are massively affected. However, the neo banks in our Index are rather resilient. Offering low-cost digital solutions will help fintech companies limit the impact and take market share from incumbents. Let’s look at two examples:

Lending includes neo banks centred on consumer lending and SME lending. This may include personal loans, mortgage lending and credit cards. The performance of lending neo banks has been mixed across customer segments, regions and individual players during the COVID-19 pandemic.

Lending to SMEs has seen a boost as the economy took a hit, leaving many companies short of cash. Starling Bank, for instance, has seen a surge in SME lending since being accredited as a Coronavirus Business Interruption Loan Scheme and a Bounce Bank Loan Scheme lender. Under these schemes, accredited lenders can offer businesses impacted by COVID-19 up to £5 million in finance with backing by the UK government. Starling Bank aims to use these schemes to provide up to £300 million in business lending, both direct and via a partnership with Funding Circle. At the same time, Starling Bank raised £40 million in funding. Starling Bank’s increased traction is indicated in our Index, with 82% growth compared to the beginning of 2020.

Consumer lending has seen a slight drop in the short-term as consumers have been more cautious with their spending and had fewer options to spend their money on during lockdown. At the same time, lenders decreased their lending and risk appetite amidst COVID-19.

For example, Ferraturm Bank is a Finnish provider of a large variety of personal loans across 25 countries and has already reduced its lending across the market in the first quarter of 2020 and temporarily suspended lending in Poland and Spain. Their decline is also reflected in the Challenger Bank Index, with a decline of 19% since the beginning of 2020. For the future, however, Ferratum Banks expects that the current pandemic will further accelerate the digitalisation of financial services, which will enable it to re-activate its growth.

We’ve all been affected in some way or another – whether it is your own or a loved one’s health; living in a country in lockdown; or having a business temporarily on hold or closed. Now more than ever people need support and strategies for staying afloat (mentally, physically, and fiscally). In this blog we share our views on COVID-19’s impact on fintech along with actions fintechs can take in the short-term. Read more

Putting Challenger Banks on The Path to Profitability

We previously highlighted that the challenger bank’s revenue and profitability have generally not yet matched expectations. We have performed another benchmark on leading international challenger banks. While it’s a mixture of players, they share that they are all profitable. Our benchmark provides interesting learnings for success. While the path to future profitability differs per player, we have defined four strategic initiatives that challenger banks can undertake to drive revenue and become profitable. Read more

The Profitability Challenge for Challenger Banks

There has been a strong growth of challenger banks in recent years. Despite their strong growth, however, their revenue and profitability are lagging behind. We have benchmarked some of the leading international players on their propositions and financial results. Overall, a less-active customer base combined with a limited product portfolio at lower margins, leaves many challengers with low income per customer and often negative profitability. Read more

The Netherlands: A well-functioning banking market that still ofers some interesting opportunities.

Neobanks Are Setting the Benchmark in Banking

It’s all quiet at the PSD2 front… yet

The future of banks in the PSD2 era